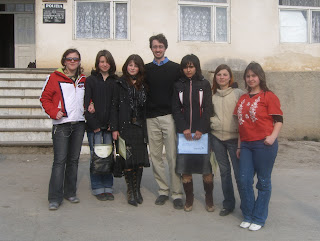 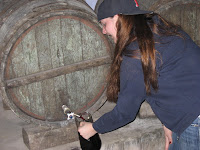 The three of us, plus Charles, a volunteer from Chisinau, stayed with PCV Anastasia and her incredibly hospitable host-family. Perhaps I was so enamored with her family because Nastia’s host-mother was a phenomenal cook. I also absolutely loved Tvarditsa, and am convinced it is my favorite village in Moldova. The roads were straight and paved, the public areas were clean with no sign of litter, and you could tell that someone had actually laid out the village according to a plan.

I have to admit that my love for this village suffered a slight setback when on Saturday morning, which was to be the start of our seminar, only one girl showed up. I don’t know exactly why this happened, but I think it had something to do with there being some sort of academic Olympiad in the nearby city of Ceadir-Lunga. In any case, it was a bit of a downer. 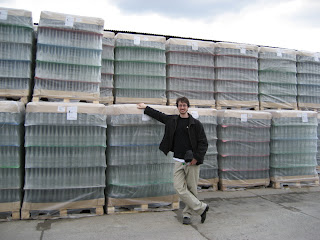 Determined to make lemonade out of lemons, we agreed to pack all of the seminar into Sunday, when we were assured more students would show, and set about exploring Tvarditsa. I think we walked about 7-8 miles and saw it all. Charles and I introduced ultimate Frisbee at the local music school (which has a great soccer field out back). Instead of shirts vs. skins, we played hats vs. no-hats. Then we walked out to a natural spring where I drank freely from the cool water (no giardia yet!), and then to some small burrow-like caves where, apparently, monks spend the summer living mostly underground. We capped off the day with a tour of the local cognac factory – man, you could get drunk on just the fumes. Considering that I was there for a business seminar, it was nice to see a locally run, efficient business. All in all, not a bad day. 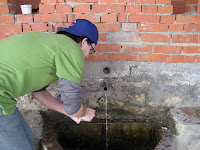 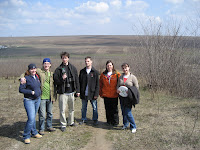 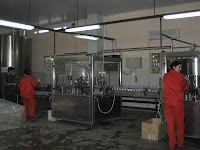 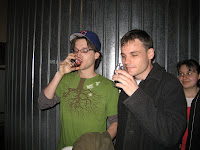 The seminar did have many more participants the next day. Out of the four student presentations, three involved the creation of some sort of transportation business. It seems that is a service sorely lacking – and I can certainly attest to being tired after walking around the entire previous day instead of hopping into a marshutka. We’ve been invited back for a festival next month, and I definitely want to go. There’s still a brinza (a local cheese) factory to tour, and a host-mother’s cooking to eat. 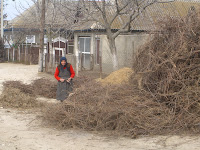 As folks in Copceac prepare for the growing season, they also prepare for the next winter. Every spring, grapevines must be trimmed to encourage new shoots to sprout. The old, dead wood – mostly twigs – are deposited in front of many villagers houses in huge piles. Here’s a woman who lives on my street, clips the vines into manageable sizes, then bundles them, and stows them away for use next winter in her pechka, essentially a wood stove in the wall of her house. For many, this is a much cheaper alternative to using gas for heating. It’s not uncommon to find monthly gas bills in excess of $75 during the winter, a vast sum when you consider a starting salary for a teacher is about $50 a month.

Also recently visited by former UZ-18 PCV Taya, on a one-night only vacation from her current post in Ukraine. Now isn't this a good argument in favor of Moldova dropping their visa requirement - she came because a visa wasn't required and brought her (few PCV) tourist dollars with her. Great to see you again, and meet Molly. Thanks for the visit.
Source: here
⇑ нагоре